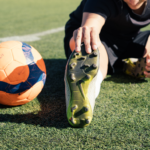 55% of all sports injuries are in the knee, making this complex joint the most common site for injury in young athletes. Unfortunately, the numbers of knee injuries in girls have statistically risen far above those seen in male athletes. One of the top factors to increased injury being the female anatomy and structure.

Female Anatomy
Although many female athletes experience pain in their knees, the root of some of the problems may originate from the structure of their pelvis and hips. The forward tilt of the pelvis along with a more forward-facing hip joint can predispose female athletes towards the femur being positioned with more of an inward angle and internal rotation as compared to the average male. It is this increased angle of the femur as compared to the vertical placement of the tibia that can be a source of chronic knee pain. If the core, hips, and thigh muscles are not strong enough to compensate for the increased angle of the femur to the tibia, the female athlete may be at a higher risk chronic anterior knee pain. Female athletes are also at higher risk of knee injuries (ACL) than their male counterparts in jumping and cutting sports, such as basketball, soccer and softball. Medical professional also hypothesizes that the likelihood of injury for female athletes increases during their menstrual cycle, when ligaments are more relaxed. It was once thought that females sustained greater injuries because there was not the same focus on training, strengthening and conditioning as male athletes. Now that has all changed, especially at the elite level of high school, college and professional sports. Today, women sports are more accepted, encouraged and pushed than in the past. There are more occurrences of injuries not only because of the sheer increase in their numbers but also because female athletes play just as aggressively as men. Increasing the awareness among athletes, coaching staff and parents is one way to positively impact this issue. Read below for additional tips for preventing knee injuries, don’t let your daughter be a statistic!

Tips to Prevent Knee Injuries
Listed below are some tips to help prevent knee injuries in athletes:

Great support from the team. Clear directions how to recover and prevent injury.

The personalization is so great! I’ve never had anyone really invest in me like Prana has. It’s so uplifting and makes me feel “worth it.”-B.H.

“Natalie is incredible at diagnosing the issue and treating the problem while also being completely professional. She’s an extraordinary leader in her field and is redefining treatment and support based on personalized approach. 1st Class Experience with world class treatment.”

“Awesome group of ladies that have already improved my daughter’s chronic pain and helping educated her on ways to stay pain free when she leaves for college. Thank you!”

“I recommend Prana Wellness. I saw Natalie, PT. She took time to listen and really assess what was causing my arm pain. She explained everything she was doing and sent me home with exercises to help. The therapy space is so calming and inviting. This is a great therapy practice!”

“The quality of care is amazing at Prana Wellness.”

Quality of care
Go to Top